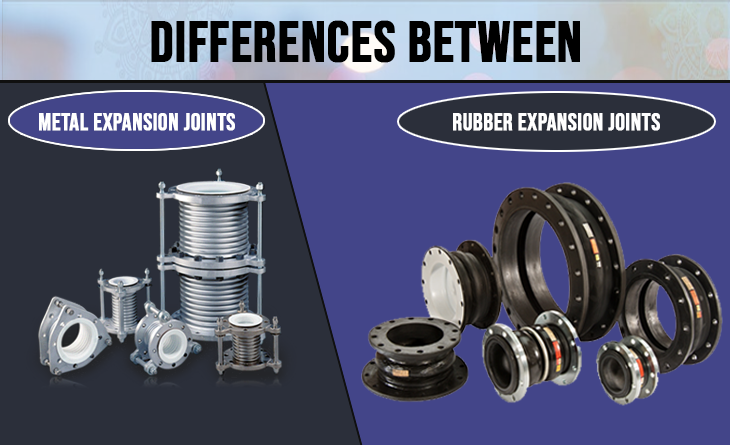 If you want to know the many differences between using metal and non-metallic expansion joints and their benefits, you are in the right place. Until the early 20th century, people used only cylindrical joints to join pipes and others. But the extreme weather changes cause contraction and expansion of concrete structures and piping systems. Expansion joints reduce these changes to ensure the stability and safety of the structures and systems. It may be for buildings, bridges, railway tracks, roadways, piping systems in the petrochemical, and power generation, among others.

What are rubber expansion joints?

Before jumping into the differences, you must know about rubber expansion joints.  Also known as elastomer expansion joints, they help piping run movements and ensure efficient systems. These flexible rubber expansion joints replacing metals with rubber joints provides many advantages.   A few noteworthy among them include reducing noise, relieving movement stresses, isolating vibration, and compensating for misalignment. Also, fabrication from fabric &  synthetic elastomers and reinforced with metal offer high temperature and pressure resistance up to 250 degrees Fahrenheit and 200 psig.

Expansion joints patented in 1920 were made only of metals to be still in use for their many benefits. But using rubber expansion joints increased in the next few decades because it has unique advantages over metal expansion joints. Though there are many similarities between their functions and benefits, there are also many differences.

Expansion joints made from natural or synthetic rubber have many benefits in several sectors. It is because of the rubber’s flexible nature and its easy attachment to other plastic and fibre to increase their benefits. A few of them include.

Ideal for structures and systems in many sectors like oil & gas, chemical processing, petrochemicals, sugar, cement, and others. You may now be surer of choosing the best rubber expansion joints for piping and others from the above facts, differences, and benefits of buying it from a reputed manufacturer and supplier to save costs and get the best flexible rubber expansion joints for better performance at affordable costs.